Halloween is celebrated each year as one of our first Fall holidays, on October 31st, and this year that day happens to be tomorrow. So HAPPY HALLOWEEN everyone!

It’s the day we dress up in crazy, and even outrageously morbid, costumes and celebrate 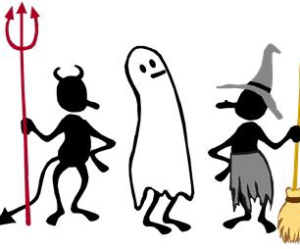 with special food and drink, and we party! Our youngsters often celebrate by going house to house yelling, “Trick or Treat” in the hopes of being given sweet treats rather than on the receiving end of a mean trick. It’s a time of pumpkin EVERYTHING these days, and I think I’ve already overdosed on all things pumpkin!

With as much of a modern fun time that Halloween is and as commercial as it has become, the holiday can be traced to an ancient and serious evolving history.

The early Celtic pagan holiday of Samhain at the end of October involved ritualistic ceremonies to ward off ghosts of the dead. The Celts celebrated in costumes made mostly of animal hides as a disguise against evil spirits of the past, and they prepared and enjoyed special feasts of autumn foods. Lanterns made out of gourds were used in these celebrations and these became the ancient version of our pumpkin lanterns. Huge bonfires were lit to ward off evil.

Halloween is distinctly tied to the religious holiday of All Saints’ Day, which in modern times is celebrated on November 1st.  Halloween, translated literally as All Hallows’ Eve, was moved from Spring in ancient times to coincide with the more religious All Saints’ Day, a day set aside to remember our deceased loved ones.

The Eastern Church in the 300’s celebrated a feast of all martyrs on May 13th as an early version of All Saints’ Day, and that date held until the seventh century. It was Pope Boniface IV who moved the feast of remembering the martyrs and deceased loved ones from May 13th to the November 1st date of our current All Saints’ Day. This was primarily to blend a pagan ritual time with a more religious one that immediately followed. Thus, All Hallows’ Eve evolved into our modern Halloween. 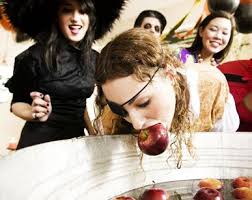 games that we now know as Halloween. The ritual of apple bobbing, that is so popular at Halloween parties, was originally a fortune-telling game on All Hallows’ Eve a couple of centuries ago. Apples would be selected to represent all of a woman’s suitors, and the guy represented by an apple that she would end up biting into would become her future husband. This Halloween ritual became a matchmaking opportunity for young women in the early 19thcentury.

Our modern Halloween has evolved into a day and night of fun and festivities in which the outrageous and ridiculous wins over anything normal and real. Fortunately, our modern Halloween rituals have little hidden meaning of actually warding off evil spirts or hint at life-altering predictions like matchmaking. Now we simply eat, drink and be merry on what was once a much more ghoulish holiday.

Have a fun and safe Halloween! 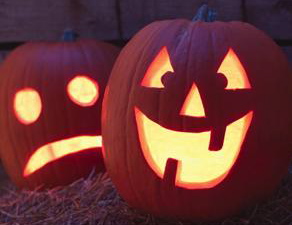 With experience in both pharmaceutical manufacturing and clinical patient management, medications and their impact on one’s quality of life have been my expertise. My secret passion of murder and mayhem, however, is a whole other matter. I’ve always loved reading murder mysteries and thrillers, and longed to weave such tales of my own. Drawing on my clinical expertise as a pharmacist and my infatuation with the lethal effects of drugs, my tales of murder, mayhem and medicine will have you looking over your shoulder and suspicious of anything in your medicine cabinet.
View all posts by James J. Murray, Fiction Writer →
This entry was posted in A Christmas Gift Idea, About James J. Murray, All Hallows' Eve, Almost Dead, Ancient Celtic Rituals, Ancient Halloween Rituals, Blog Writers, Blogging, Celtic Holiday Samhain, Halloween, Halloween Celebrating, History of Halloween Discussed, James J. Murray Blog, Murder Mayhem and Medicine, New Blog and tagged Ancient Halloween Rituals, Blogging, blogging about crime, blogging about drugs, Celtic Origins for Halloween, Halloween and All Saints' Day, Halloween Traditions, How We Celebrate Halloween, James J. Murray - Fiction Writer, Modern Halloween Origins, Murder Mayhem and Medicine, murder mystery writer, new blog, pharmacist writer, Prescription For Murder Blog, Samhain Turns Into Halloween, writing pharmacist. Bookmark the permalink.